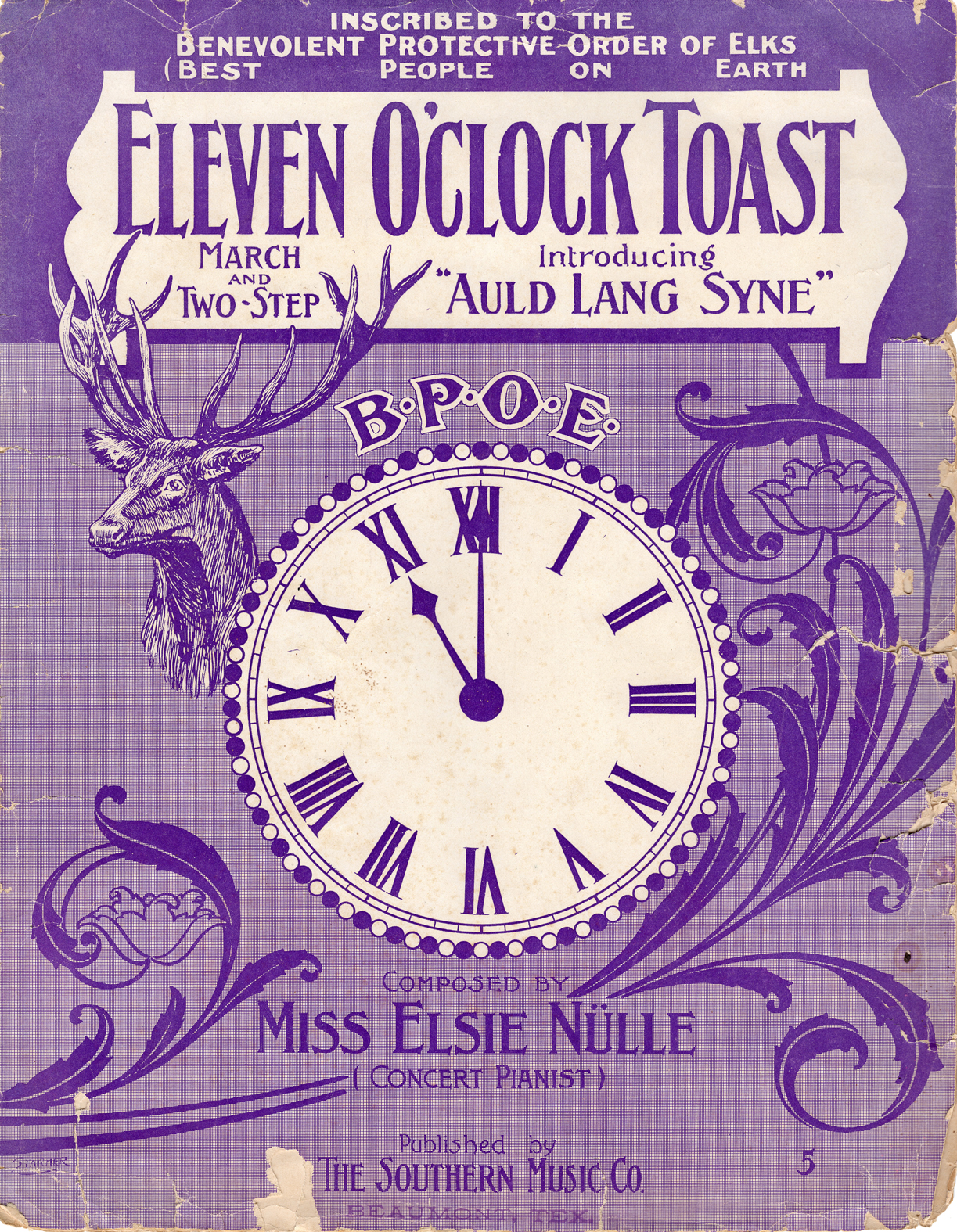 A quick social and then ending with the 11 o'clock Toast.

YOU HAVE HEARD THE TOLLING OF 11 STROKES.

THIS IS TO REMIND US THAT WITH ELKS,

THE HOUR OF 11 HAS A TENDER SIGNIFICANCE.

WHEREVER ELKS MAY ROAM,

WHATEVER THEIR LOT IN LIFE MAY BE,

WHEN THIS HOUR FALLS UPON THE DIAL OF NIGHT,

THE GREAT HEART OF ELKDOM SWELLS AND THROBS.

IT IS THE GOLDEN HOUR OF RECOLLECTION,

THE HOMECOMING OF THOSE WHO WANDER,

THE MYSTIC ROLL CALL OF THOSE WHO WILL COME NO MORE.

MORNING AND NOON MAY PASS THEM BY,

THE LIGHT OF DAY SINK HEEDLESSLY IN THE WEST,

BUT ERE THE SHADOWS OF MIDNIGHT SHALL FALL,

THE CHIMES OF MEMORY WILL BE PEALING FORTH THE FRIENDLY MESSAGE.

"TO OUR ABSENT MEMBERS"

THE ORIGIN OF THE TOAST

In regard to the Elks' 11 O'clock Toast and its origin, we have to go back long before the BPOE came into existence. One of the main contributions of Charles Richardson -- in stage name of Charles Algernon Sidney Vivian and founder of the American branch of the Jolly Corks -- was to deliver in the hands of newborn Elks the rituals and traditions of a fraternal organization started in England around 1010 A.D., the Royal and Antedeluvian Order of Buffaloes (RAOB), to which he belonged prior to coming to New York.

The RAOB, or Buffaloes as we shall henceforth refer to them, also practiced an 11 o'clock toast in remembrance of the Battle of Hastings in October of 1066. Following his victory, William of Normandy imported a set of rules, both martial and civil in nature, to keep control of a seething Norman-Saxon population always on the edge of a revolution.

Among those rules was a curfew law requiring all watch fires,bonfires (basically all lights controlled by private citizens that could serve as signals) to be extinguished at 11 each night. From strategically placed watchtowers that also served as early fire-alarm posts, the call would go out to douse or shutter all lights and bank all fires. This also served to discourage secret and treasonous meetings, as chimney sparks stood out against the black sky. A person away from his home and out on the darkened streets,when all doors were barred for the night, risked great peril from either evildoers or patrolling militia.

The hour of 11 quickly acquired a somber meaning, and in the centuries that followed, became the synonym throughout Europe for someone on his deathbed or about to go into battle: i.e. "His family gathered around his bed at the 11th hour," or "the troops in the trenches hastily wrote notes to their families as the 11th hour approached when they must charge over the top."

Thus, when the 15 Jolly Corks (of whom seven were not native-born Americans) voted on February 16, 1868, to start a more formal and official organization,they were already aware of an almost universally prevalent sentiment about the mystic and haunting aura connected with the nightly hour of 11, and it took no great eloquence by Vivian to establish a ritual toast similar of the of the Buffaloes at the next-to-last hour each day.

The great variety of 11 O'clock Toasts, including the Jolly Corks Toast, makes it clear that there was no fixed and official version until 1906-10. Given our theatrical origins, it was almost mandatory that the pre-1900 Elks would be expected to compose a beautiful toast extemporaneously at will. Regardless of the form, however, the custom is as old as the Elks.

At every meeting of the BPOE, and every social function, when the hour of 11:00 p.m. tolls, the Lodge conducts a charming ceremonial known as the"Eleven O'clock Toast." In fact, the clock tolling the eleventh hour is part of the BPOE official emblem and is directly behind the representation of an elk's head in the emblem of the Order.

Regular meetings of Subordinate Lodges have always been held a night. In the earlier days, they were usually held on Sunday nights and were concluded about eleven o'clock. As the participants departed, the Brothers made inquiries about the absent Brothers and expressed sympathetic interest in the causes of their absence.

It soon became a custom for some member to propose a toast to the Brothers who were not present. And in the course of time, this custom was quite generally observed whenever a group of Elks were together at eleven o'clock. Eventually, the Grand Lodge specifically provided for such a ceremony to be observed during Lodge sessions; and designated it as "The Eleven O'clock Toast". Under this provision, whenever a Lodge was in session at that hour, the regular order of business was suspended for a few moments while the Exalted Ruler recited the beautiful ritual prescribed, concluded with the words: "To our absent Brothers."

Since women were permitted to join the Elks since 1995, the toast is now pronounced as "To our absent Members."

DAP - October Is A Great Time To Learn